“I think it is generally agreed that picture writing was the beginning of our lettering. You might wish to communicate something to someone at a distance. If you have no letters or none common both to you & your correspondent, what else can you do but draw a picture? — the language of pictures is common to all. After a time your pictures are used to signify words and not simply things, and as the system develops and communications become more precise, the pictures become simpler and simpler, more & more conventional, and they come to signify single sounds rather than whole words. And the pictures, by now, have ceased to be pictures. They are, by now, hardly recognizable as representations of things: they are conventional signs, & their pictorial origin is forgotten.”

Designing with type is as much a science as an art.  It requires a delicate balance of lines, shapes and strokes to deliver an appropriate solution. (tweet this!)

Selecting a typeface goes beyond knowing the difference between serif and sans serif fonts. Understanding the use of a certain font family, appreciating the unique differences and details of a font (which make every family different in its own way) and noticing how characters work with each other is also part of the selection process.

What about art?  Typography is an art expression that is based on principles. These principles are the ones that set the foundation for good typographic use.  Fonts can set the mood for a certain period of time, movement, place and even a person. These principles also include the audience the work is meant to be created for, and what we want to communicate with them.

In the past decade, typography design has been recognized by the mainstream market more than ever. There was a documentary by Gary Hustwit about the Helvetica font (1957, by former Haas salesman and designer, Max Miedinger), campaigns against Comic Sans and font designer Matthew Carter, who won a MacArthur grant, proved how typography is not taken for granted anymore, so people outside of the design and typography world can recognize good type from bad type.

The first step to select a font is identifying how it is going to be used in its applications.  Are we going to use it for print or digital? Even though the distinction between print and web fonts is very light nowadays, we still need to consider which is the best typeface to use, figure out if it’s available for web use, and if it’s legible on both mediums.  What is the weight, direction and contrast of a particular font?

While every typeface has a distinct look and feel, its application and functionality will dictate how useful it will be in our project.

There’s a distinct difference between Serif and Sans-Serif typefaces and it is the ending of the stroke on each letter.  The origin of the Serif in typefaces is considered to be related to the chisel used by the Romans to carve letters into stone left accidental marks by the end of each line. Sans-serif fonts on the other hand, as its name states, are typefaces with clean ending (no Serifs) at the end of the stroke. 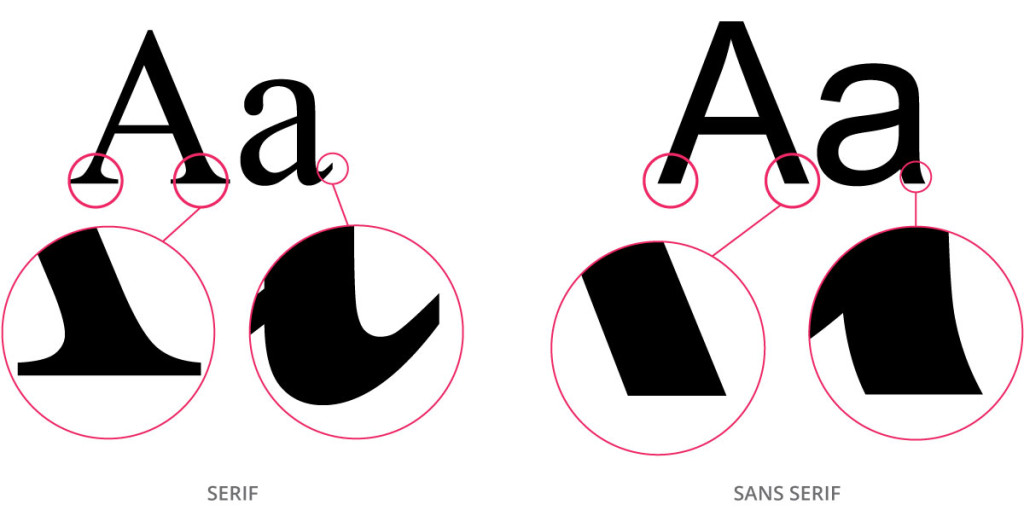 When typefaces were first created, there were no families; all fonts were roman design.  In the early 16th century, italics or cursive were introduced as a condensed type to save space. It was in the late 19th century that typefaces were grouped by basic visual characteristics of the parent design, but with individual variances.  This original vision of typeface families by Morris Fuller Benton, Director of typeface development for American Type Founders in the late 19th and early 20th centuries, has been expanded over the decades, making families larger, more diverse and thought out.

The popular Cheltenham typeface was the first font to be released as a family by the American Type Founders (ATF).  By 1915, there were twenty-one variations of Cheltenham making it the leading typeface and most complete family in the United States.  It was also the favorite font among newspapers.  The New York Times adopted this font in 1906 as a headline for its publications.

Nowadays popular typefaces families are vast and complex.  We can even hear the term “super families” when a certain typeface offers a diverse array of typographic color (weights), direction (italics) and width of its characters (condensed fonts).  Rich typographic families are great for brands that want to achieve different types of messages and tone; think of it as different ways of having a conversation, from a subtle whisper to a very loud and bold statement.

Typographic hierarchy refers to the level of importance expressed by text composition in a specific space.  This can be achieved with type size, type weight, contrast, composition and background colors.  Headlines and announcements are great examples of typographic hierarchy where the use or combination of bold typefaces (weight), size and use of uppercase (all capital letters) and even background colors can direct and guide the spectator’s eye to a specific place in the composition.

In a very cluttered visual world, hierarchy can be used to persuade a rapid reader, deliver a message in a very short period of time and to invite users to read more and absorb the content.

Visual contrast gives our composition different meanings.  We can intentionally make one work stand out more than others in our logos or headlines to tease our audience and make them see what we want them to see first.

Typographic composition is not all about the combination of weights and sizes, we can also create a set of typeface pairings to convey a certain message or establish a brand.  This is an art in its pure form, and it requires great sensitivity towards the shape of each character. Even though there are no rules, there are some basic foundations that you should consider to create a successful remix of typographic design.  Here are some of the best practices:

Finding the perfect font for your brand is more complex than just selecting a font you like.  As with anything visual, the font you select to represent your brand and message will deliver a certain tone and personality.  A good exercise is to look around you, find fonts and think of what they make you feel. What is the first reference that comes to your mind, and more importantly does it resemble a known brand?  Many brands have used a typeface that is recognized by the public with a specific product making their brand recognition more difficult if not used with intention and differentiation.

Please log in again. The login page will open in a new tab. After logging in you can close it and return to this page.